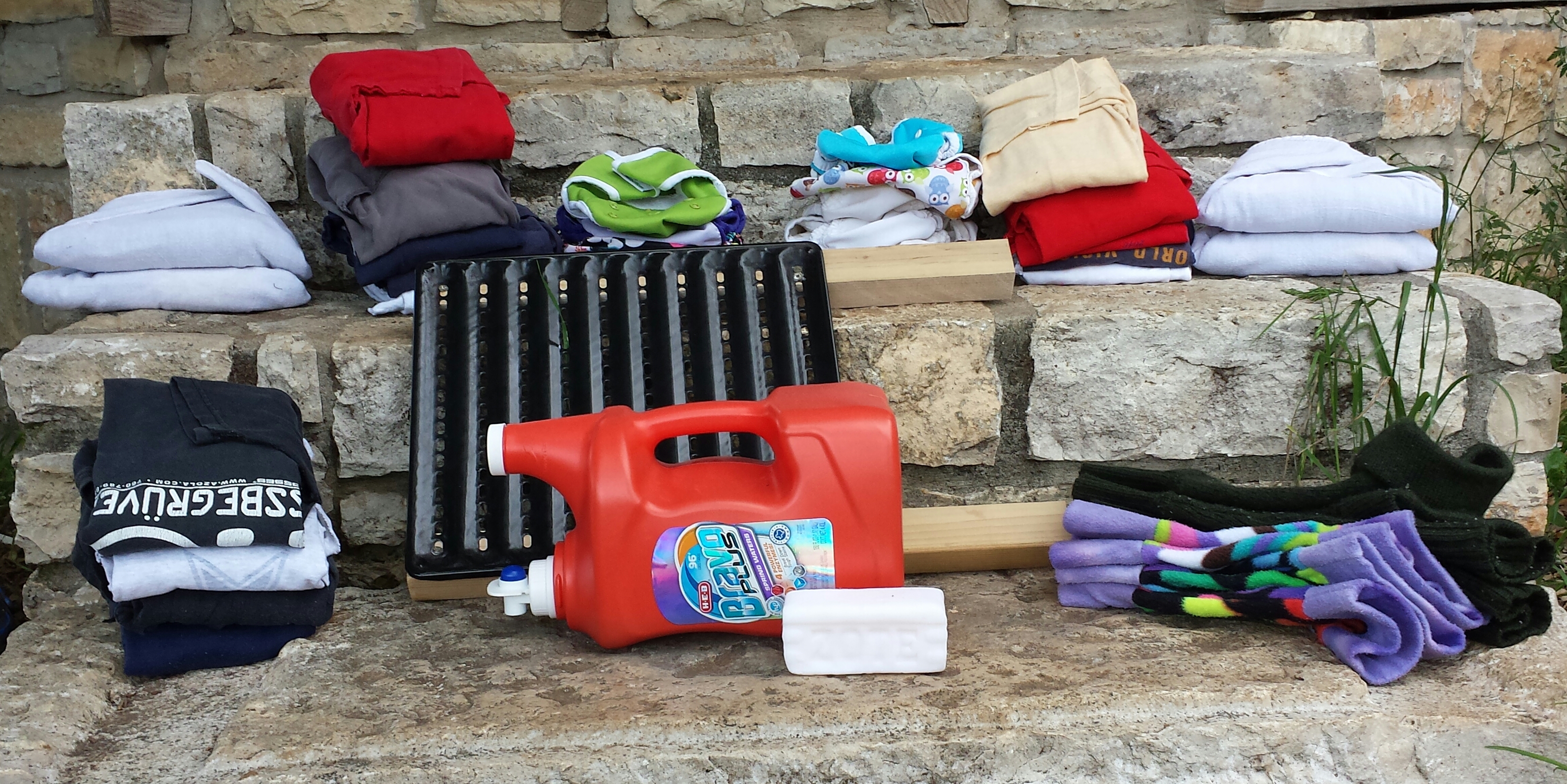 Going into this challenge I had a lot of preconceived notions. I thought washing by hand would be hard and overly time consuming. I was already familiar with using flats but they were strictly back up diapers. Overall I thought it was going to be stressful to keep up with in my somewhat chaotic life.

The idea of hand washing seems daunting if you’re accustomed to tossing your laundry in an automatic washer. You have to consider the laundry from a different perspective. No matter what, laundry takes time but for most people it’s passive time, for hand washing you have to actually budget active washing time into your day. I thought it was going to be difficult to make time to wash diapers but it wasn’t. Once I figured out how much time it took me to wash diapers, it was easy to figure out when to do it. I definitely felt the physical activity part but it was a good feeling and I think that activity actually made me feel better and gave me more energy.

I already had some flats I used on occasion but tended to reserve those for backup. I thought it was a pain to get poop off before washing and folding was time consuming and complicated. Once I started using only flats and figured out what combinations and folds worked for us it was really very easy. I folded a few at a time as they dried and it just became part of my daily routine. My twins have really been fighting diaper changes lately but this last week they were more compliant with diaper changes than they’ve been in awhile. My diapers seemed softer this week and I’ve been wondering if they were more comfortable because of that.

I do think it’s helpful to not have a minimal stash. I’m not saying everyone needs to have a huge stash or that they need to buy a bunch of expensive flats but you never know what’s going to happen. In my case, I initially planned to use a minimum amount of diapers since I was washing every day. Typically it only takes 2-3 hours for flats to dry this time of year but it was really cool and wet last week. I greatly underestimated the amount of time drying would take. My diapers were taking 1-2 days to dry and if it hadn’t been for the hoarded tshirts my mom and I had, I might have had to use another diaper type during the day or even given up. Because I had extra tshirts, I was able to keep on trucking and even learned that I really like tshirt flats.

Wringing out diapers was the hardest part. Every time I thought I had them as dry as I could get them by hand, there was more water. If I am ever in a position to hand wash on a regular basis I definitely want to invest in a wringer. They’re kind of expensive, though, so I’ll have to think on how to diy one.

I did have a family emergency on Sunday and had to leave all the kids alone with the husband for most of the day so I told him to use whatever diapers he felt comfortable using. I didn’t return until late at night (hence the late post) so by the time I used a diaper again, the challenge was over. If the challenge hadn’t been over I would have gone right back to my flats and hand washing because I’m stubborn and I was enjoying it.

I really do think using flats and hand washing is a viable solution to diaper need. It used to be the way things were done but it’s becoming a lost art. It’s an important skill to have, natural disasters aren’t uncommon and no one knows what their financial situation is always going to be. Now that I know it’s an option, I would definitely use it if I had a need. I’m actually going to continue using my washboard for tough stains but as long as I’m privileged enough to have a washing machine, I’m going to continue using it for the bulk of my laundry.